My husband and I had the "pleasure" of puppy sitting my sisters latest foster dog this weekend - Sam the Rottweiler. 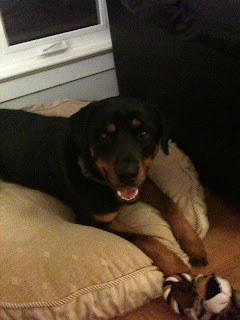 I'll admit, I was nervous. I have had no experience with breeds that require more "assertive" handlers. I'm not sure I am an assertive handler - but I sure am bossy. :)

Sam came over on Tuesday for a quick visit to see if there would be any problems with our dogs and cats. Indie and Travis were in their ex-pen while Sam looked around. He was less than interested in them. Excellent.

Sam came over Thursday night, and despite everything going well on Tuesday, we decided to keep him separated from our much smaller [and I'm sure tastier] animals. Our pets were confined to the basement by way of baby-gate (the cats were not pleased) and Sam had run of the main floor.

The weekend took some finessing to ensure there were no encounters, but it all went very well.

For just coming in to our home he listened very well - I was very, very impressed. He came when called, followed basic obedience commands and would "wait" for his food until released. He is quite the love bug and enjoys being scratched all over too!

Sam seems like a good boy and only appears to have the same "issues" any dog would in a new home. He loves to go for walks (he would however make someone an excellent jogging partner) loves to play fetch (he doesn't release toys yet so we alternated between two toys to get him to give the one he had up) and appears to have had some basic obedience training at some point (he needs some reminder training sessions though).

Oh, he also preferred drinking from the toilet (no fear, our toilets are pet safe for drinking) which he'll drain quickly and then slobber all over everyone and everything. Eewww!

I wouldn't recommend him for a home with small children (only because of his size and puppy like demeanor) or cats (I think he had some prey drive bubbling up) or a for a first time dog owner but he'll certainly make someone a good dog.

I did learn something from the weekend - I don't want a dog bigger than a Sheltie...ever. Big dogs just occupy too much space - usually the space that I want to be occupying.
Posted by CC at 3:02 PM