I decided to make some resolutions this year. The boys decided to follow suit as well. So here they are...

1) No more caffeine. I've broken this one already,  but I swear it is the last one!

2) No more artificial sweeteners.  I've read loss of nasty stuff about them and I vow to keep them out of my diet as much as humanly possible. Again I have already broken this one but I swear it is the last!

3) Exercise, purposefully,  at least 3 days a week. Gym membership will finally come in handy for something other than making it easily to locate my car keys.

4) Keep active during the evenings instead of "relaxing". By "relaxing" I mean parking my very round rear end on the couch for an inexcusable amount of time each night.

5) Asleep by 10:30 each night. Should make mornings easier and help avoid snoozing the alarm clock 25 times before rolling out of bed 20 minutes before having to leave for work. Will also eliminate bad hair days.

6) Train my dogs more often and with purpose. They can now change and take out the garbage but they can't heel worth a darn.

7) "Cure" Indie's fear of people. We know we can't really cure this, I'm not sure I really want to as it keeps people away. Indie and I are not people people/dog.

8) Learn how to use my new sowing machine. I wanted one and I got one and now it must earn its keep... or at least I do.

9) Use my new sowing machine for good,  not evil.

2) If I fail at #1, then I will make a better effort not to barf afterwards.

3) I will bring the ball back after Mom or Dad throws it,  instead of just chasing it.

4) I'll make a better effort to hold my contacts during trials instead of making Mom look like a fool.

5) I will stop hoovering treats out of people's hands. It's rude and a little frightening.

1) Bark less at things that aren't even there. I know they aren't there but I like the treats that Mom and Dad offer afterwards. Can we saw "whiped".

5) Acknowledge that heeling is not a foot race with Mom. You snooze you lose.

7) When I fail at #6, at least stop putting their heads in my mouth. No one likes to pet a wet kitty.

8) Stop trying to jump into the car crates when the door is still closed. This just makes everyone look dumb.

9) Acknowledge that only getting in to my own crate - not just the closest one - gets me a cookie. Being in the same crate as Travis, at the same time, does not earn bonus cookies for style. 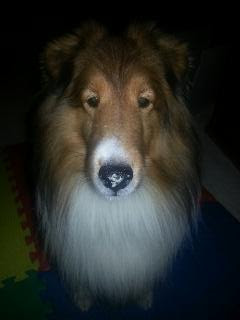