It is official-official. I have registered Vixen with the AKC. She will forever and beyond b e known as… Now I just have to wait for her AKC paperwork, and then complete her import paperwork to get her CKC registered. J
Posted by CC at 4:37 PM No comments:

She needed a name. I had my favourite, hubby had his. In the end he “won”. Well, he didn’t really win per say – I simply conceded this his name was more suited to the puppies budding personality. 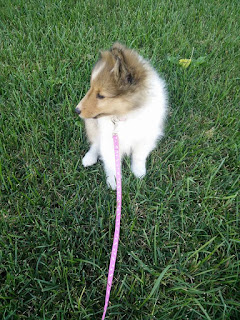 Now to come up with her registered name. I need to sleep on it.
Posted by CC at 11:05 PM No comments:

I am not going to lose a single opportunity to socialize this new little girl. Today Indie is back in agility class, and of course “pup-pup” is coming along. We have two names on the short list, so I am sure in the next 24 hours one will stick.

Lucky me! Children! There were children in agility class! I quickly put them on puppy duty while I helped set up and walk the course. Pup-pup was mitten with them. Little people are fun! 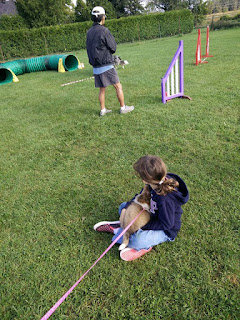 Also about were my instructor’s two dogs. They are polite little border collies who had no interest in playing “smoosh the puppy” thank goodness.

We moved equipment about, and she was comfortable taking in all those sighs and sounds.

When I was working Indie she rested (and I use that term loosely because she doesn’t rest, she stands still though) in her crate and took everything in stride. I love this puppy. 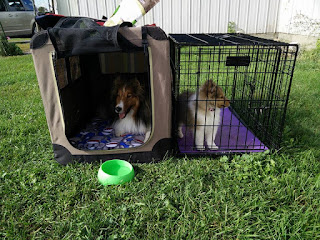 She is here! She is amazing! She already rules the roost! 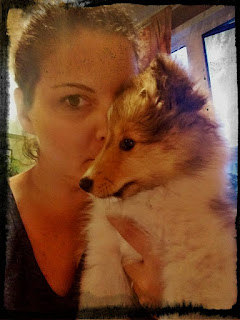 While the fact I was going to *eventually* get a puppy was a well known; the fact that one was coming home today was a surprise to most. I shared this secret on purpose with 2 friends – people I trust beyond their ability to keep a secret. I shared this secret with one other “friend” (see the quotes there?!?) accidentally, but that is another story worth sharing another day.

You’ll also notice that I used the noun “she” to describe the new addition. Yup – I failed to bring home the long sought after male I was so sure I was going to get. Why the change? Well a few reasons, but the main one was this was the right puppy for me. I had my eye on this litter when they were first born. The pedigree was amazing and there was tons of agility in both lines. However, it became apparent very quickly that the males would be over sized, so I opted out. I wanted an in-size show boy, not a girl.

The weeks passed and this litter, one way or another, just kept coming back to me. After many emails and telephone calls with the breeder, she quickly determined that the right puppy for me was a little girl named “Middle”.

Right after yesterdays workshop with Jessica Patterson, I high-tailed it to my Mom’s to drop the boys off (under a ruse that hubby and I were off for a night away of gambling it up at the Casino), and then picked my husband up at work. We were off to the border and headed for Albany, NY!

This morning, bright and early, we arrived at the breeders. The entire litter was fantastic. Full off life and spunk! Not a shy one in the bunch. I took “Middle” off to the side to do some “puppy aptitude” tests with her; she excelled at everything I threw at her! She was coming home with me for sure!

7 hours later we were back home, picking up the boys at my Mom’s. We were ready for the intro. I distracted her in the house while hubby followed a minute later with the puppy secured in his arms. It took her a few moments to realize there was even a puppy in his arms. There were tears, followed by the inevitable question “What is HIS name?”

I was sure the pink collar and leash hanging off her would have been clue enough - but apparently not - blinded by puppy love. My Mom had been begging for me to get a girl instead of a boy, so she was tickled when she learned her new “grand-dog” was a girl and not a boy.
Posted by CC at 9:53 PM No comments: 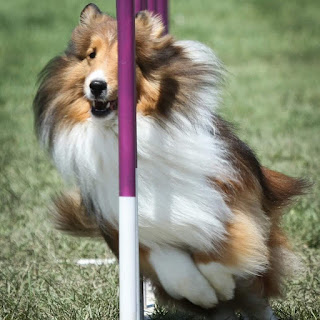 I am ending my boat adventure early. My back is hurting too badly to keep going for 3 more days. We were passing back through the Big Rideau so I was dropped at the car. Everyone else will continue on and I will pick everyone back up on the 11th.
Posted by CC at 11:30 AM No comments:

Kingston was fun, but nothing exciting to report. Except maybe on the delicious ice cream I got to eat. :)

We are heading back the way we came. Locking down now...much easier than locking up. 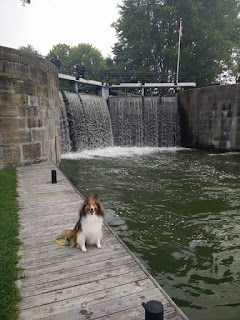 Indie and I got out at one of the lock stations because things were moving a little slowly...you'd think they would have invented a faster way of moving boats through locks.

Indie wanted to give the locks a go. He would have been better except for the need for....thumbs. 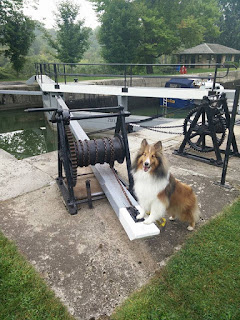